Time flies and next week it is time for this year's SHIFT Film Festival. Together with programmer Alexander Gusev, we will have a different look at the films that have been selected. Alexander talks about the great variety of shorts in three competitions, and about the importance of Ukrainian Focus with everything that is going on in the world.

"Our team in the formed program managed to find a balance between artistic quality, creative search, which is so important in the films of young authors, and a reaction to the dramatic events of our time."

The difference between filmmaking in Ukraine and the Netherlands

"The Ukrainian film process is dominated by two factors that, as it seems to me, do not affect the Dutch film industry. Due to a poorly developed cinema infrastructure, a weak economy and a lack of solid private funds aimed at the cultural sphere, Ukrainian film production is too dependent on state funding."

"Filmmakers' need for state budget funds makes them vulnerable to the arbitrariness of officials and sometimes encourages them to seek success in the field of ideological conjuncture. Fortunately, the allocation of funds for film projects depends on the assessment of experts independent from officials, and yet there are ways for abuse. Co-production is not very common yet, a practice that could become an important source of funding for Ukrainian filmmakers in the current conditions, when the national film process is practically stopped due to the war. Another important feature of the Ukrainian film process is, so to speak, its capital-centeredness."

"In Dutch films I admire the abundance of works made with the support of regional authorities and saturated with local color. In Ukrainian films too much of it is occupied by works that take place in Kyiv or in a conventionally faceless big city. However, there are quite a few exceptions to the rule; in recent years, significant Ukrainian films have appeared that also convey the uniqueness of various parts of the country, and often the regional film commissions that have appeared not so long ago provide important assistance to them."

Criteria for choosing these films for the programs

"Our team has chosen for selection as a kind of slogan ,Shifting Distance, which is understood in the widest sense as a variety of shifts in perception, changes in social life and psychological transformations. However, the full-scale aggression of Russia against Ukraine, which began on February 24th, inevitably one way or another weighed on our work. We gave preference to films containing a significant socio-political message and presented a program of notable examples of Ukrainian films."

"As usual, we have tried to present in our program works of all cinematographic types, fiction, documentary and animation, wherein special attention was paid to films that seem to expand the notion of genre texture. Among our films you can find documentary animation, anti-detective, mockumentary, a film whose story unfolds in a peephole and a film built like a commercial clip."

"As for the similarities, we wanted to show how young filmmakers place at the center of the narrative themes and characters that usually exist on the periphery of the plot, such as the work of cleaners, train drivers or mining everyday life, as well as how random at first glance mise-en-scenes convey the tragedy of civilization and the sorrows of human existence - the kitchen conversation of a soldier returning from the frontline and his mother reveal the bloody horror of war and the lies of propaganda in which the country exists, the scene peeped in the corridor poses a severe moral dilemma to the uninvited viewer, or the drunken revelations of one of the party participants become a test for friendly relations." 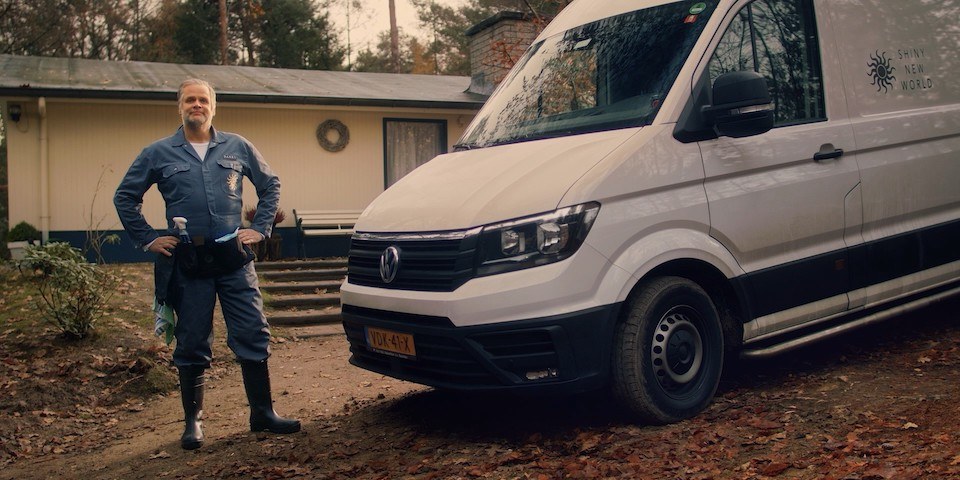 All films in every selection

"We wanted to start the festival with a particularly topical piece. Return, by Ghiath Al Mhitawi is about the civil war in Syria, but it struck me that the dialogue of the characters could exactly become a dialogue between a soldier of Putin’s army fighting in Ukraine and his mother. Images of a woman (it is noteworthy that she is a teacher - a successful touch that makes her an accomplice of the ideological machine), who oscillates between her maternal feelings and faith in propaganda, which has entered into her flesh and blood, and a soldier who has lost illusions, realizing that he is fighting on unjust war and suffers from the inability to share this understanding with the closest person, suitable for many military conflicts, peoples and eras. A very expressive symbol is a washing machine that washes away traces of military hardships from uniforms, just as totalitarian ideology brainwashes citizens, depriving them of glimpses of personal emotions, understanding and experience.

Beauty, anxieties and mysteries of someone else's existence

"In Phase by Mykola Zaseev the war is still on the edge of consciousness of the protagonist, a ten-year-old boy, whose father went to defend the East of Ukraine from Russian aggressors. In the perhaps last carefree summer of his life, he discovers the world with its beauty, anxieties and mysteries of someone else's existence, behind which suffering and crime can lurk with the same probability as pleasure and love. In The Train Driver by Christian Wittmoser and Zuniel Kim the someone else's suffering most radically intrudes into the existence of the hero. A minimalistic and at the same time expressive story about the specific professional trauma of machinists there can also be perceived as a parable about our ability to cope with the most powerful experiences.

"This ability is intertwined with the problem of historical memory in Visiting Ben Shemen by Miriam Harris, a complex, rich canvas in which family memories appear as a slice of national and world history. The chosen form of storytelling, the very texture of the narrative conveys the fragmentation of our memory, our ideas about the past." 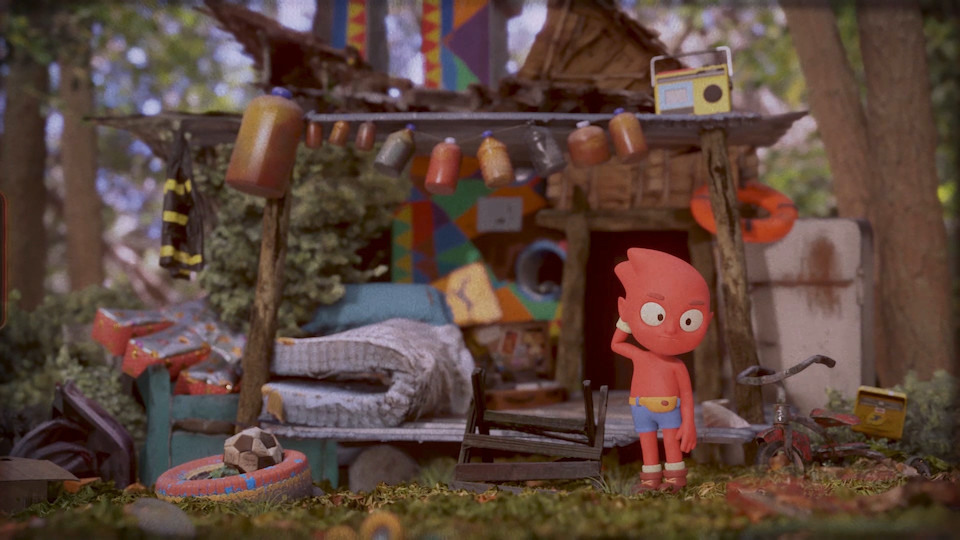 "On the contrary, The Peephole by Tiziana Martini is very minimalistic, however, the story told is close to many, almost most of us turn out to be either observers of other people's dramas - rather confused than gloating - or victims of not only one's cruelty, but also one's manipulations. In the Woods Ilgın Saçan is also about a peeped existence, but in this case the object of observation itself seeks to draw attention. The story of a forest monster who, instead of keeping the secret of his existence, makes a documentary about himself, is an ironic commentary on the modern society of the spectacle.

"On the contrary, Fanmi by Sandrine Brodeur-Desrosiers and Carmine Pierre-Dufour tells about intimate, hidden feelings of daughter and mother, their unconditional love and inevitable parting. Prosopagnosia by Steven Fraser is an example of the search for artistic means of reflecting a cognitive disorder, a whimsical, intricate, sophisticated tale of a specific disease, testifying to the importance of recognizing features and facial expressions that we are not entirely unaware of. Cleaner by Edwin Mullane shows the emotional difficulties of rapprochement between employee and employer, and excellent acting giving the topic a broader dimension of the difficulties of overcoming the inescapable alienation between people."

"Shiny New World by Jan van Gorkum, an interpretation of the Evil Dead and other stories about a company of reckless teenagers flirting with infernal forces in an abandoned house, is ironic about the ability of the consumer society to manage with the most monstrous situations, the ability of business structures to negotiate with criminals and dictators. Canary by Chrysoula Korovesi аnd Marios Gampierakis is a piercing and original metaphor for loneliness and professional burnout, an interesting mixture of hand-drawn and stop-motion animation, showing the intrusion of fantasies into our unsightly reality. Broken Record by Marie Seurin and Mathilde Cadrot dedicated to our ability handle our friends' bouts of grief and ultimately the limits of our compassion." 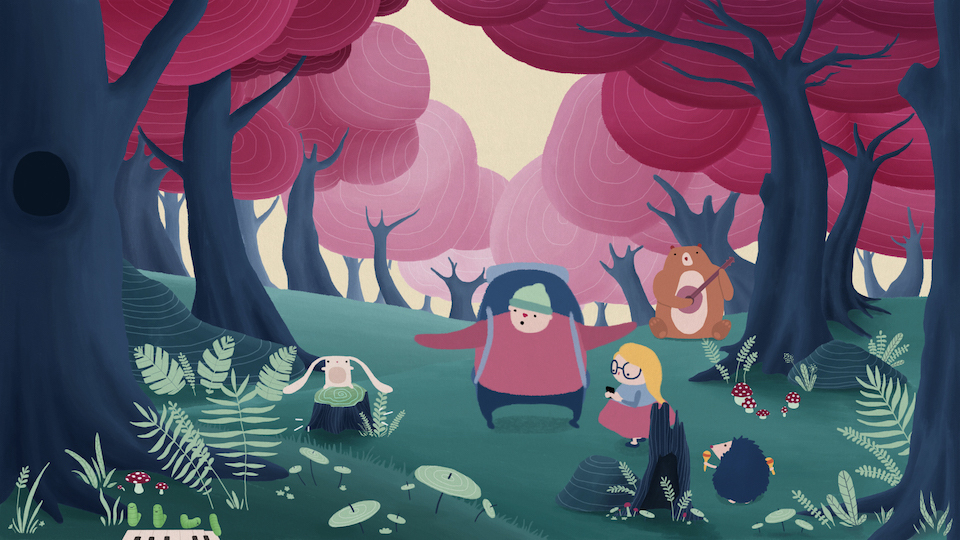 "First film of the Short Film Competition: Made in Limburg, Undergrowth by Tim Ewalts, conveys the exhausting purgatory of existence in a backward, ignorant corner, the endless whirling through boredom and resentment of life with relatives who are for you neither close nor dear. It has something universal, something inescapable, it seems like a dream seen after reading The Brothers Karamazov or a folktale about the brothers who lived with their father once upon a time."

"Funkele by Nicole Jachmann reveals delicate theme of the awakening of sexuality, shows feelings of youthful timidity and uncertainty. Shut by Niels Bourgonje conveys the deepening horror of a person who realizes that the consciousness of his loved one is immersed in the twilight of psychopathy. Dick by Kiki Henger shows an image of our usual trying to change or control the tendencies of our loved ones that we find unacceptable."

"Forest Song by Andrey Naumenko that opens the Ukrainian Focus program describes the conflict between the reality of nature and digital phantoms that unfolds in the soul of each of us - and the difficulties that parents face in trying to keep their children interested in nature. In Dad’s Sneakers by Olha Zhurba, whose restless camera and torn, as if crumpled manner of editing, conveys the experiences of a pupil of a Ukrainian orphanage who spends the last hours before flying to the United States, in the image of an American woman who adopting a boy we met a particularly convincing embodiment of a person’s ability to overcome all the barriers separating him from his neighbors through unconditional love and compassion.

"In Krovyanka by Arkasha Nepytaliuk these love and compassion enter into a fight with xenophobic prejudices, allowing the characters to separate their own feelings and beliefs from the imposed social stereotypes. The Prince and the Mystery of the Charmed Frog by Nataliya Skryabina is a funny and at the same time deeply dramatic animated cocktail of folktales about a young man from a rural outback, full of strength and ambitious aspirations, dreams of great battles and great love, who rushes into battle over and over again, but, despite all his heroic determination, his adventures turn out to be in the genre of comedy, not epic."

"In Mia Donna by Pavlo Ostrikov the fantastic starting point of the plot appears as a metaphor for the deep essence of marital relations, while the film is imbued with a sympathy for human disappointments and a sense of time that unexpected for such a young author. Not Today by Khrystyna Syvolap dedicated to the joy of being, which binds us, despite the hopes of resurrection in another world, to earthly existence."

Check out the complete program, tickets and selected films.